Inspiration for your process 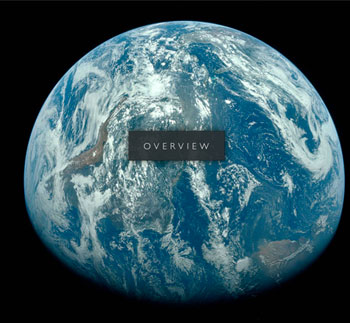 Planetary Collective: The Overview Effect
“Astronauts who have seen the Earth from space have often described the ‘overview effect’ as an experience that has transformed their perspective of the planet and mankind’s place upon it, and enabled them to perceive it as our shared home, without boundaries between nations or species”
Jeremy Rifkin: The Empathic Civilization

Daniel Pink: The surprising truth about what motivates us

Derek Sivers: How to start a movement

Leadership Margaret Wheatley “Paradigm Shifter, Author and Co-Founder of the Berkana InstituteMeg opens Walk Out, Walk On with a dare: “This looks like a book and reads like a book. But it can be much more than that.” So is any conversation with Meg. Sitting with her, chatting over a cup of tea, you begin to notice what usually goes unseen—those invisible paradigms that shape how we think about ourselves, our jobs, and our communities; the mental models that serve as the lens through which we see the world. Meg is someone who helps you see there is another way. She helps us all see the world differently.But Meg is no ivory tower philosopher. She’s with the people and of the people. Meg works with organizations and communities around the world, helping them tap into their own ingenuity, intelligence and caring to solve real world problems. Meg is one of the world’s greatest teachers because she is one of its most voracious learners. She brings to her work a tremendous sense of wonder for life and for the capacity of the human spirit. In doing so, she creates new possibilities for us as leaders by changing how we think about things.”

CEO Al Carey for PepsiCo ”There are few business leaders out there today who have seen more than Al Carey. After 30 years spanning the company, across brands and through various functions, in 2011, Al became the CEO of PepsiCo Americas Beverages. In assuming the role, he brought his own unique vantage point on leadership.Al draws on his depth of experience – as a business man, a father, a coach, a student, and much more – each day as he strives to fulfill his role as a “servant leader” and empower others. As such, he leads in a style that is singularly his own, but offers insights that can benefit us all. Deeply committed to his position as a people enabler, Al works hard to make PepsiCo a company that does more than sell any one or bundle of products: Under his leadership, it is a place where people can test and maximize their personal potential.”